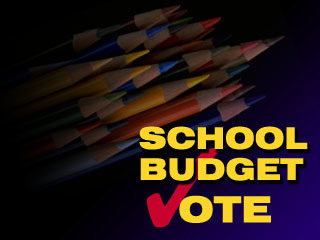 Hearing sets the stage for May 17 budget vote, BOE election

The public has had a chance to review Pioneer School District's proposed $62.4 million general fund budget. Now it's up to the voters to decide during polling scheduled for Tuesday, May 17.

The budget vote, school board election, and capital project referendum will be held at Pioneer High School room C-143, from 6:30 a.m. to 9:00 a.m. Voters must be 18 years of age, show proof of residence, and have lived in the district for at least 30 days.

Prior to the Board of Education's regular meeting on May 3, assistant superintendent Nick Silvaroli presided over the annual budget hearing. He explained how the budget process starts early in the school year, is shaped by the district's annual needs, and balances programs for students while limiting the burden on taxpayers. Mr. Silvaroli's slideshow

The proposed budget increases spending by 5.03 percent and raises the property tax levy by 2.98 percent.

At the same time, the budget supports staffing needs, created either by learning loss related to Covid-19, new initiatives or retirements.  Staffing additions/changes in the budget:

Mr. Silvaroli explained that if the budget proposal is defeated on May 17, the district would turn to a contingency budget that would result in $500,000 in reduced expenditures. That plan would limit community use of schools (unless all associated costs are reimbursed to the district), would prohibit new equipment purchases and non-essential maintenance, and would place limits on certain field trips and supplies.

Also during the budget hearing, the two candidates for a five-year term on the Board of Education were introduced and gave statements.

Incumbent Mary Lou Merlau has served on the board for 15 years. She warned against the risk involved in Pioneer not following state mandates and the consequences of rejecting aid from Albany, as some in the community have suggested.

Challenger Mark Kless said he would like to foster an atmosphere of more parent involvement in the schools to counter what he feels is too much control by the state of New York.

More about the board candidates, as well as the proposed $28 million capital improvement project, can be found in the 2022-23 budget guide