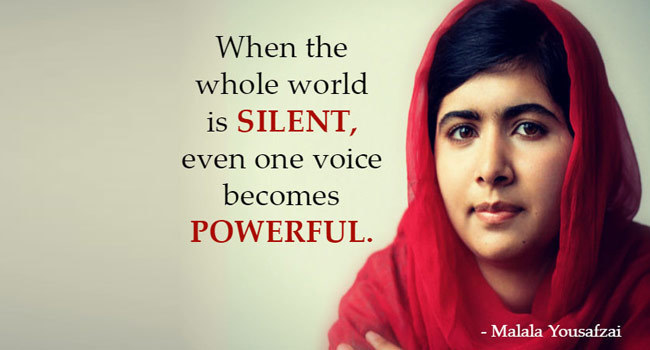 Teacher/organizer David Richards said, "Sixth grade is coordinating a two-week fundraiser to raise money to support the Malala Fund headed by Malala.  This effort supports the completion of our Activism Unit in English Language Arts (ELA).

"Our goal is to raise $250 as a building from April 20 to May 4.  Seventh and eighth students may donate at the greeter's desk, while fifth and sixth grade teachers will be given a container to collect donations in home base," Mr. Richards said.

Each time a student activist donates $1, they will receive a raffle ticket on which their full name is written along with their grade level.   They will be entered into a drawing for one of five copies of Malala's autobiography, entitled I Am Malala.

"In addition, for the same donation of $1, sixth graders will be entered into a separate drawing for the privilege of drenching me, Mr. Richards. with water balloons sometime in May during the sixth grade lunch," Mr. Richards said.

In addition, there will be a hat day for students on April 28, as well as a dress down day for staff on April 28.  Students who donate $1 on that day will receive a sticker as proof they have contributed to the fund-raiser.  This permits the child to wear an appropriate baseball hat for the day.

According to Mr. Richards, Malala's organization builds and staffs schools around the world to open up doors of opportunity for the disadvantaged so that every child has the right to an education.  "Our initiative is helping to support our goal of making our students aware of the power of activism for positive change," he said.

Raffle tickets and collected funds collected can be dropped off at any time to Mr. Richards' room, B119.